Home About the Clinic History & Accomplishments

Why the “Buckeye Clinic”?

In 2010, after Chief Aweng Deng was presented a buckeye necklace, he became very interested in the tradition, strength, and luck associated with the buckeye. He said, “If you can build us a clinic that will care for our young mothers and babies, we will call it the ‘Buckeye Clinic’.”

Bol Aweng and Jok Dau, two of the Lost Boys of Sudan, returned to their home village of Piol, observed the conditions in their village, and were determined to do what they could to help.

Bol and Jok brought together a group of people to form a Steering Committee to develop plans to improve health in the village.

Bol Aweng and Steve Walker went to South Sudan to assess the need. They found that a small health clinic had been built, but was not functioning. The chiefs and elders identified maternal and child health as the greatest need. A fundraising goal was set, a website was developed, and fundraising began with churches and school groups.

A solar energy system was installed which powers a refrigerator to store vaccines. Through August 2015, over 600 newborn babies have been vaccinated for measles, polio, DPT, and TB. 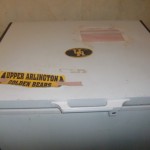 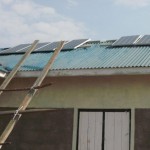 Construction of the Maternal and Child Health Care building was completed, including water catchment systems. 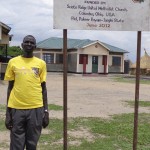 Medical equipment and supplies (World Food Program, Reproductive Health Kit) flown in from Geneva Switzerland. On December 15, a civil war broke out and most people fled the village. The clinic remained open and was not damaged. 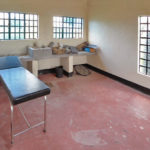 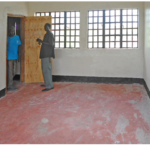 2014 Planting of trees on the Buckeye Clinic Compound

When Jok Dau and Steve Walker visited the clinic in March 2013 the area around the clinic was totally bear with no trees or any place for patients to rest in the shade while they waited to be seen by clinic staff.  Later that year over 100 fruit and shade trees were purchased to be planted at the clinic and in family compounds near the clinic.  These trees were two to three feet tall at planting.  When Bol, Jok, and Steve visited the Buckeye Clinic in 2018, some of the trees on the compound were 20 to 25 feet tall providing shaded areas for patients and community meetings.  During the week of the visit many meetings were held with the chiefs and clinic staff in the newly available shade.

Because of danger in the area caused by the civil war, women, children, and elderly fled for safety to the swampy area near the White Nile River. In April, because international aid was not reaching the Piol area, the Buckeye Clinic began to deliver food to the area. Four shipments totaling 20,000 pounds of beans, rice, flour, sorghum, salt, sugar, and cooking oil were distributed to 3,000 people. 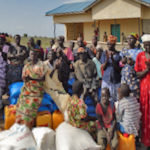 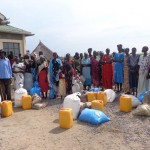 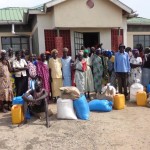 When the civil war in South Sudan started in December 2013 the great majority of people fled the Piol area for safety in the swampy area near the Nile River. In March 2014 Chief Aweng Deng, communicated that because people left before the planting season, and if they would return there would be no food available. He requested that the Buckeye Clinic make food available as an incentive for people to return home. In April 2014, 5,500 pounds of rice, beans, corn flour, sorghum, lentils, sugar, salt, and cooking oil were shipped to the village. The food was distributed to the few that had returned to the village. As word of the availability of food spread more and more people returned to the village. Food was then delivered about every three months for a total of 18 times. The last distribution in April 2018. A total of 236,455 pounds of food was distributed, costing $128,500. James Magok, former Twic East County Health Director and great friend of the Buckeye Clinic, coordinated all of these food distributions. In 2018 the Buckeye Clinic provided seeds for a community farm and diesel fuel for tractors to cultivate the fields. A successful harvest was possible which enabled food to be available on a sustainable basis in the community.

56,000 Pounds of food was distributed to over 10,000 people in Piol. In March, a two football field size area was enclosed with a chain link fence. This will provide needed security in times of attacks and enable the planting of a large community garden. An Emergency Medical Transport (a three-wheeled motorcycle with a cargo bed) was purchased for the clinic. This will provided transportation to the nearest hospital (40 miles) for patients needing additional care. A cell phone charging station was installed. 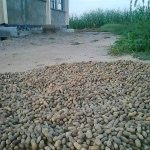 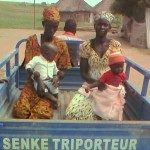 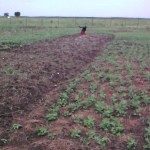 In early 2016, the Buckeye Clinic completed construction of staff housing with two bedrooms and a sitting room. This cement block building will eventually house a nurse mid/wife and a laboratory technician. A new latrine was also constructed on the clinic compound.

Food deliveries continued. Because people are still returning to Piol after the planting season, they have no crops to harvest. Rice, beans, corn flour, salt, sugar, and cooking oil was distributed to over 6,000 people (17,500 pounds in March and 26,290 pounds in May).

110 fruit (mango, lemon, papaya, guava, avocado) and shade (mahogany and ficus airtide) trees were planted on the clinic compound and in the village. 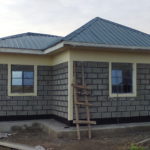 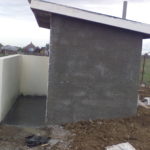 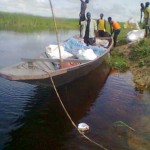 In early 2017 the United Nations declared a famine in parts of northern South Sudan.  A although Piol is not in that area it is included in the 5.5 million people who are in a state of severe food insecurity.  In other words they do not know where their meal will come from.  One of the reasons for this is the rampant inflation in food costs. In 2017,  the Buckeye Clinic distributed food in Piol in February (13,795 pounds), and May (12,115 pounds).  In those three months the prices of food increased dramatically (rice 80%, beans 69%, sugar 40%, salt 120%,vegetable oil 57%).  And over the past three years since the civil war began, food prices have risen over 1000%.  Adding to this problem is the availability of food. Because of insecurity on the road from Juba, the capital city, and Bor, the State capital, where recently 31 people were killed in one attack, food only arrives in military escorted convoys. The market is often very short on food and other supplies. In an area like Piol where the majority of people are subsistence farmers, they have very little cash.  With prices rising so high they do not have enough money to buy food, if it is available in the market.

In June, a farming project has also been supported by the Buckeye Clinic.  The government provides tractors for cultivating if he community can provide the diesel fuel.  The clinic has purchased 55 gallon drums of fuel which have been delivered to the village. The chiefs have decided to create a community farm to plant over 100 acres of corn and sorghum.  The Buckeye Clinic will also provide the seeds for the farming and seeds for individual families to plant their now tomatoes, okra, squash, and peanuts.

The Buckeye Clinic in Piol, South Sudan, is now a full-service clinic for south Twic East County in Jonglei State, South Sudan. Our combined efforts over the past seven year are a reality … and even Beyond our Plans and Dreams. It is a joyous time! [Read More…]

July 15, 2017 is one month since professional staff began working on June 15th with other staff at the Buckeye Clinic in Piol South Sudan. Though not formally now a full-service Primary Health Care Clinic (PHCC), our collaboration with the John Dau Foundation means that the Clinic is functioning as the equivalent of a PHCC. The JDF manages clinic services with support from UNICEF and the United Nations Common Humanitarian Fund. [Read More…]

2017-18 Construction of new buildings on the clinic compound

In 2017 and early 2018, Peter Mwendwa, the trusted contractor who built the Buckeye Clinic Maternal and Child Health Center, was again at work in Piol.  At the request of the village Health Committee and the clinic staff, improvements to living conditions and support were needed.  Two staff housing units were built, each having two staff rooms.  In addition, a staff dining hall, a kitchen, and two showers stalls were constructed.  With the addition of cell phone coverage in the area, many more people had cell phones.  The cell phone charging station that had been previously constructed could not meet the demand.  An additional station was constructed, more than doubling the number of phones that could be charged at one time.