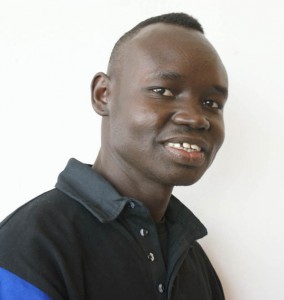 Bol Aweng – I was born in Piol Village, Jonglei, State in Southern Sudan. In 1987, I was forced to flee my homeland at the age of six without parents as helicopter gunfire and aerial bombs ripped apart my village along the White Nile River. I took refuge in Ethiopia and Kenya before making the US my new home in 2001. I started schooling from under the tree in refugee camps to learn English, arithmetic, science, and Kiswahili. I developed art skills on my own from memory and imagination using dirt, walls, and cardboard as my surfaces. My main medium included charcoal, chalk, and color pencil plus other pigment dirt due to lack of materials. I started with stick figures that depicted the exodus of the Sudanese lost boys. I continued work with African scenery, especially native African animals and landscape, and science illustrations for disease awareness in the camp. I devoted more time to art in Nashville, Tennessee where I had a minimum wage job to buy the materials. I painted particularly with acrylic color, paper, canvas, river rock, and other available surfaces.

In Nashville, I attended school at a local junior college to obtain an associate degree in Computer Information Technology. I transferred to The Ohio State University in 2006 to study International Studies. I changed to Fine Arts and received a four-year degree in digital art. I see the positive impact of digital media in my current work as I execute various renderings using modern and traditional styles. I now look for unique perspectives, particularly through computer modeling, four-dimensional video, and two-dimensional digital manipulation.

I went back to Africa in 2007 for the first time in 20 years to have an exciting reunion with my family. I met my mom, dad, and four siblings who were born after me. I was brave enough to hold my tears as I learned a lot of terrible things about their survival in the war zone for two decades. I learned that the enemy abducted my mom, sister, aunt, and her kids. Mom was the only lucky one to be left behind when she had to deliver her baby on the way. My aunt, with her kids, was able to escape later after a couple of months. My sister was lost until 2013 when she was found living with another tribe. Now she has just reunited with family after 28 years.

In 2010, I returned to South Sudan with Steve Walker to assess the needs in my village. The chiefs told us that maternal and child health was the priority. We returned to Columbus determined to raise the funds needed to make this a reality. I make presentations to schools and churches to help raise money for the Buckeye Clinic. Again in 2018, Steve, Jok and myself visit the village to see the progress and impact of the clinic in the life of the mother and children. It was a dream comes true.

I continue to visit schools throughout the year sharing about the clinic and encouraging students to help in raising funds for the clinic. To date schools have helped to raise about $170,000.

I have been working very hard to support my wife and five children (2 girls and 3 boys) and the family back in Africa. I now live in Hilliard and work at the American Income Life Insurance Company as a sale agent. I supplement my income with paintings on canvas and images of animals on rocks.