Hello Everyone, Steve and Bol have arrived safely in Nairobi, Kenya. They will get prepared to go to Juba (capital) in South Sudan this week. Please keep them in your prayers always. I thank you profoundly for making this trip possible.

It seems like a long time since our 30 hour trip to Nairobi. We were met at the airport by a friend of mine who helped us manage our six pieces of luggage, navigate the busy streets and many stops in the process of getting the visas for Southern Sudan. I mention the six bags because it was necessary to bring that many because of all the donations we received the day before we left. The Upper Arlington freshmen have chosen to study the Lost Boys of Sudan as their service learning project. In one day they gathered four boxes of first aid supplies for the Piol Village. A member of Scioto Ridge UMC contributed another box of medical supplies and the RPAC (where Jok and Bol work at OSU) donated many shirts and two volley balls. A friend of Bol also donated four bags of toys which will bring smiles to the children’s faces. THANK YOU to all! 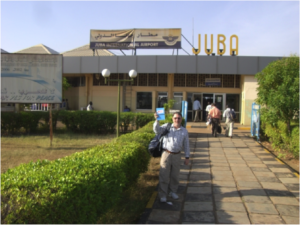 We have made it to Juba safely after spending 2 days in Nairobi. Steve have stepped onto the Juba red soil for the first time, he has seen the aerial view of the Nile, humidity of the city, the craziest Juba ‘s neighborhood road but he feels more welcome to the environment.  We are staying in the lodge that cost $ 100 a room but it is worth it a lot because we good convenient services. We had good start today and are expecting the same thing tomorrow before we proceeded to Bortown next day. Chol Majok is journeying with us and his presence saves us a lot of time as he connecting us with the right people whom we really need to see in Juba, especially in Health department.

Please we will up-date you with more information when the internet continuing cooperating with us well. 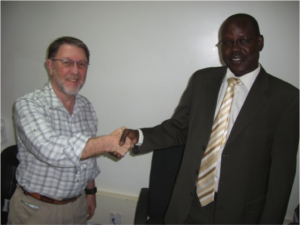 Bol and I had a very successful meeting with the Minister of Health today. He listened to Bol’s vision of a health clinic in Piol and gave us an over-view of the health system the Government of Southern Sudan is developing and directed us to the next people to talk with. We hopefully meet them tomorrow. A very good first day in Southern Sudan!

Steve and Bol are now in Juba and both of them are really enjoying the city. I spoke with Steve by phone today. He was pleased for the warm welcoming he has received. Things went well as they have been planned. They met with Minister of Health and Bishop in south Sudan. They will leave tomorrow to Bortown, the capital city of Jonglei state where they will meet with Jonglei minister of health and possible state governor. Please, keep them in your prayer always.

Yesterday was another good day. We met with the Director Generals of Primary Health Care and External Assistance and Coordination in the Ministry of Health. Then we met with the Episcopal Bishop of Twic East Diocese. All recognize the need of a health clinic in that area and will support our effort. Each gave us specific suggestions on how to proceed. Last meeting of the day was with the Bishop and he closed the meeting with a prayer asking for God’s blessing and guidance in the clinic development and a safe and productive trip for us.

We then visited with two of Jok’s brothers and many other friends from Piol. As we walked around town Bol saw many people he had not seen in years. He saw his teacher from the refugee camp that called him by name and remembered that Bol had been given the highest grade ever in his class. As Bol met other friends and cousins there was lots of shaking of hands and slapping of shoulders and big smiles. They all went through a lot together and the bond they have is very strong.

Today was an interesting day. The flight we scheduled for Bor this morning did not go because there were not enough passengers. We have tickets for tomorrow though and made good use of the day to talk with International Relief and Development, who are building four clinics in Jonglei State, where Piol is located. Lots of good information and good advice.

Please keep us in your prayers.  Steve

Bol and I, along with our friend Chol, flew to Bor this morning. Two interesting but un-eventful things welcomed us to Bor. A military roadblock which we eventually were able to get permission to go on only to our hotel, and a military gun check of luggage and rooms at the hotel. We spent some good time under a tree with the Legal Advisor to the President of Southern Sudan, then had a good meeting with the Director General of the Ministry of Health of Jonglei State.

Tomorrow we will visit a clinic under construction that is similar to what we are proposing. We will also visit a hospital built buy a Lost Boys group from Grand Rapids, Michigan. Sunday we will go on to Bol’s home village of Piol. We are looking forward to spending a week there.

We had another wonderful flight to BorTown this morning before we had to wrap it up in the Piol village in next couple days. We met Majok Mading, one of the Piol member and intellectual in the highest position in government of Southern Sudan. He received us at the airport and we will be staying in the same lodge with him tonight. He welcomed and briefed us on the life in village but he is expecting us to see more by ourselves when we reached there.

Steve had tasted one kind of the fish from the Nile River which he liked a lot and he suggested that Jenny would love it too. We meet with Minister of Health in Jonglei State who put more energy on our thought and plane.

Your prayer is one of the special tool we never need to miss. 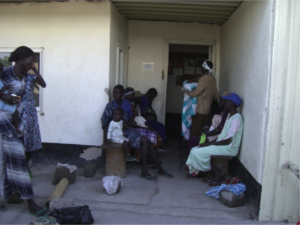 We have made it safely to the Duk lost boys clinic in Duk County after the 10 minute family reunion in Piol. We haven’t spent much time there but we will be with them a lot in few days ahead. I was so please to see my parents and they both recognized me as Baba Nyankiir and were more pleased to meet Steve Walker and Steve had a pleasure to meet them. Steve and mom share a lot of the information while I was overwhelmingly exchanged a lot of greeting with relatives and few people in the surrounding area. Steve and her will continue their talks when we got back but he has more to share now based on what they had discussed today.

Steve recorded the good footage of the reunion in which he felt more weight on his body when he talked to them and observed their living condition but the moment ended up very excitingly.

Please pray for our trip back to Panyagoor and Bortown tomorrow. 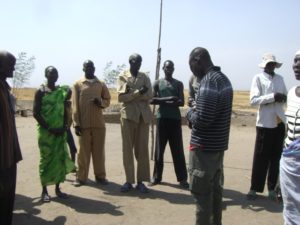 Bol surprised his family today because we were planning on getting to Piol later in the week. What a wonderful reunion!

The drive from Bor to Piol and then on to Duk was through many different types of terrain. Each one very interesting in its own way. The “road” was a real experience too. We were really tired after seven hours of 105 degree heat (in the shade). 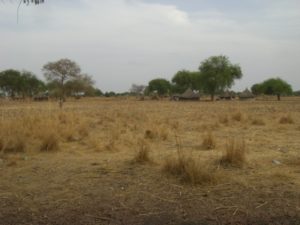 encouraging.  It will be great to get to the village on Wednesday and start to hear from the people who need the services.

Thanks for your interest and prayers.

2/4/2010: Updated on assessment trip to South Sudan, by  Jok Dau
Steve and Bol came back to Piol from Duk. Steve will meet on Saturday with village administration (Chiefs) and all people to inform them about the good news of the Piol Health Clinic.

Also, he will preach at church on Sunday. All people at the village are very excited about his coming. The community and pastors honor him to feed the community with words of God. After the service on Sunday, he and Bol will go back to Duk before they head back to Nairobi, Kenya.

2-7-2010: An Exciting meeting with village Chiefs and Elders, by Steve Walker 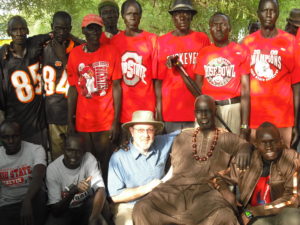 2-8-2010: Final Day in Sudan, by Bol Aweng
We have very successfully covered our mission in Southern Sudan and we will finally be heading to Kenya tomorrow. We have encountered a lot of blessed and pure hearts people who help us accomplishing things beyond our expectation starting from Juba, Bortown and the whole time we spent in village. We were promised by the villagers about our safety in the area in term of the insecurity, feeding, drink and diseases that totally come true after all. Neither myself nor Steve had abdomen disorder or flu.

We have witness the desire and concern on health needs from the villagers who spoke during our meeting with them on Saturday. Our stay in the village was a really short one but it was quiet well used. All the Pan-Piol villagers expressed their excitement and many thanks to Jenny and other family members who allowed Steve to be part of the assessment trip to Sudan. They are thanking all friends of Bol, Jok and Steve who dedicated themselves to help people of Pan-Piol. They have nick-named Steve as Pan-Piol because of his love of Piol people and Southern Sudanese in general.

Thanks for your all prayers and please don’t stop there.

Every success is a decision from our Lord.