Home Uncategorized April marks an important anniversary for the Clinic

April marks an important anniversary for the Clinic Posted April 14, 2019

This month we are proud to celebrate the one-year anniversary of the Buckeye Clinic in South Sudan being upgraded from a Primary Health Care Unit to a Primary Health Care Center. This designation by the South Sudanese Ministry of Health has resulted in the Clinic being able to receive additional medications, including injectable drugs, thereby enabling staff to better address the medical needs of the 10,000 people in Piol and surrounding settlements.

When Bol Aweng, Jok Dau, and Steve Walker were in South Sudan a year ago, they were able meet with influential people from the Piol area to encourage them to support the request of the Piol Village Chiefs to upgrade the clinic. They used their connections and met with the Federal Minister of Health who then signed a Ministerial Order to upgrade the Clinic. On April 6, 2018, a few weeks following their visit, Piol held one of the largest, most important — and most joyous — celebrations in the history of the village to dedicate the Primary Health Care Center. The Governor of Jonglei State and Minister of Health and representatives of the United Nations were in attendance to cut the ribbon. 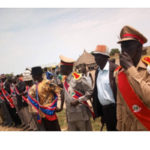 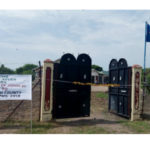 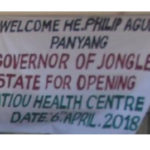 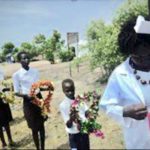 Nurse Midwife Mary Amuor leading children to the celebration. They are carrying wreaths for the dignataries Mary is wearing the necklace of buckeyes Bol Jok and Steve gave her 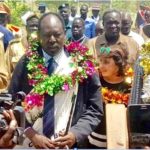 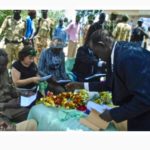 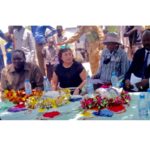 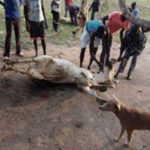 A cow was slaughtered for the ccelbratory feast 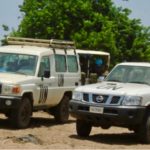 It was also a proud day for the Buckeye Clinic staff. They were recognized for their service that has greatly improved the health of mothers and children